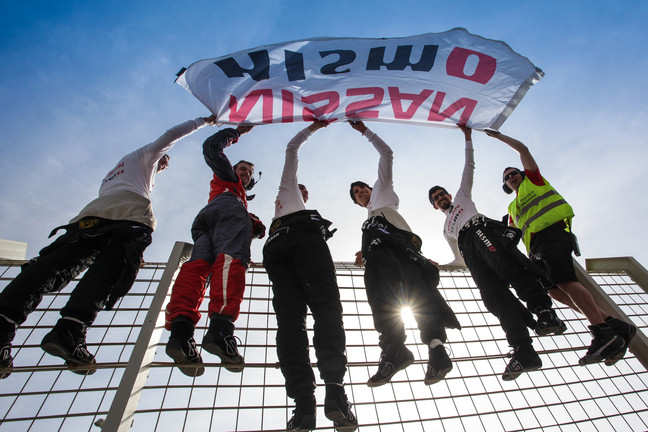 The 2015 European Le Mans Series and FIA World Endurance Championship seasons got underway this weekend at Silverstone. In a busy few days of motorsport, the Blancpain Endurance Series also got started at Monza in Italy. After Sir Chris Hoy’s historic win at Silverstone on Saturday, Nissan saw even more success during Sunday’s WEC race when the Ligier-Nissans of G-Drive Racing took a 1-2 finish in the opening round of the world’s best sports car championship.

GETTING UP CLOSE AND PERSONAL WITH NISSAN

Nissan made a promise to racing fans in the UK when it announced that the Nissan GT-R LM NISMO would debut at Le Mans in June and sit out the Silverstone race. Throughout the weekend everyone visiting Silverstone has had the opportunity to get up close and personal with Nissan’s Le Mans car in a specially set up garage, purely for fans to visit.

Many of the Nissan WEC drivers have been on hand over the weekend to keep everyone up to date on the progress of the car’s pre-season test program with Marc Gene, Harry Tincknell, Max Chilton and Olivier Pla taking part in a Fan Forum where they were grilled by members of the public. Jann Mardenborough was at the track to chat to fans and the media after returning from the GP3 test in Valencia. The race cars may have been replicas, but the Nissan NISMO pit garage was the most popular place at Silverstone!

Nissan’s LM P1 drivers are now en route to the US for a four-day test with the Nissan GT-R LM NISMO. With the Le Mans car due to be homologated later this month, this is a vital test which will give the team the opportunity to really build up the mileage on the new car in readiness for Le Mans.

“We are in the final stages of preparing our LM P1 car for its debut at Le Mans,” said Nissan’s Darren Cox. “The next four days will provide us with the opportunity to really build up the mileage of the car to make sure we are ready for the race of our lives at Le Mans. It’s a shame we couldn’t race at Silverstone but we were very happy to open our door to the fans who have shown such a commitment to our sport. We have seen some incredible racing this weekend and we can’t wait to add the P1 battle to the great competition we are facing in LM P2, LM P3 and of course GT3.”

The ELMS season opener was a classic sports car race, providing thrills and spills throughout. Nissan’s Harry Tincknell was at the heart of the battle in the #38 JOTA Sport Gibson-Nissan when in the closing stages he fought tooth and nail with the #41 Nissan-powered Greaves car. Greaves’ Jon Lancaster held on for the win, closely followed across the line by Tincknell and then the TDS Racing Oreca-Nissan of Tristan Gommendy.

A Nissan-powered 1-2-3 in the ELMS race was followed up by a 1-2 for the Ligier-Nissans of G-Drive Racing in the WEC race on Sunday. Six hours of non-stop action throughout all of the classes has set the scene for a thrilling season of racing. Nissan will of course join in the P1 battle from the Le Mans 24 Hours.

The Blancpain Endurance Series kicked off the new season with a fast and furious race at the Autodromo di Monza in Italy. Both Nissan GT Academy Team RJN GT-Rs showed a great turn of pace and the #23 car took fifth place in the PRO class.

2012 GT Academy Europe winner Wolfgang Reip was at the wheel of the 12th placed #23 PRO class Nissan GT-R NISMO GT3 for the start and the Belgian racer had broken into the top 10 by the 20-minute mark of the three-hour race. He made great progress during his stint, handing the GT-R over to Katsumasa Chiyo in seventh position. Chiyo set off and was soon hunting down a Bentley, which will have brought back memories of the Bathurst 12 Hours for many. The Japanese driver was all the way up to fifth when the safety car came out but lost some time at the restart before pitting for Alex Buncombe to jump in for the run to the flag.

The #22 PRO-AM Nissan GT-R NISMO GT3 of Florian Strauss, Ricardo Sanchez and Marc Gassner got away well in the hands of Strauss on Sunday afternoon, the German Bathurst winner immediately gaining ground. Unfortunately the race for #22 was short-lived when rising oil temperatures forced Strauss to pit and retire the GT-R.

Buncombe is a master of Monza and was soon in pursuit of the leaders again, despite losing a wheel sensor over a curb, which knocked out his ABS and traction control! He then lost a lap when the safety car came out but picked up the wrong car which meant that Buncombe lost touch with the leaders and had to settle for an eighth place finish, which was fifth in the PRO class.

“We should have had a podium today,” said Buncombe. “But I’m pretty happy that we took fifth in class despite having a few problems. The real positive to come out of today is that the 2015-spec GT-R is very driver-friendly so we had really good pace during long runs on old tires so that will really help us as we go through the season.”

Sir Chris Hoy and his teammate Charlie Robertson took a class victory in the opening round of the European Le Mans Series at Silverstone. This was Hoy’s first win in international motorsport and his first win with Nissan.

Driving the #3 Ginetta-Nissan in the four-hour race, Hoy and Robertson took a brilliant victory, setting the pace for a stunning new season of Le Mans racing. This race marks the next step on Hoy’s road to the 2016 Le Mans 24 Hours with Nissan.

It was Robertson who took the start in the #3 car and he made a great getaway from the back of the grid, setting Hoy up for the drive of his life in the middle stint of the race. Behind the wheel for almost two hours, Hoy learnt a great deal about the nuances of endurance competition.

“I knew we had a good chance of making the podium when Charlie got that great start and extended the lead,” said Hoy. “I knew I had to hang onto it. I had some scary moments – a couple of spins when the tires started to go off – but other than that I had a great time and I really enjoyed it. It’s the longest stint I’ve done in a racing car and I have the new challenge of the GT cars and the P2 cars around me too. Everything was new to me and it was an amazing experience. The car is great to drive, especially when it’s on fresh tires and for a novice like me to be able to come and race it, it shows how well the car is built.”