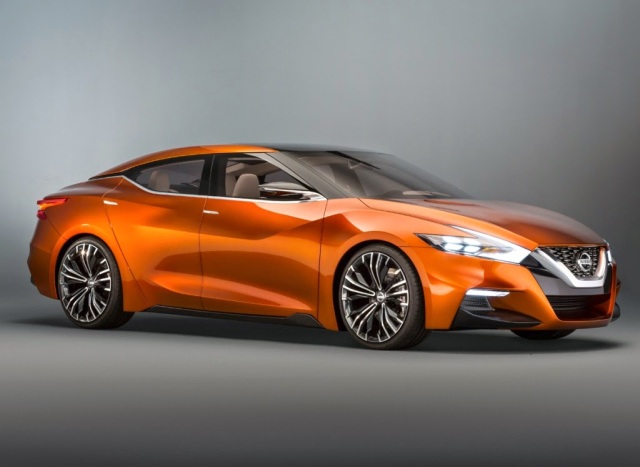 The Japan based car manufacturer revealed its concept of a Sports Sedan at the Detroit Motor Show and later showcased the same at the New York Auto Show. The vehicle is still in its production stages and will be ready to hit the markets in this fall. The sales will reportedly kick off in North America.

The design of the new 2015 Nissan Maxima will channel the concept of sports sedan car as exhibited in the auto shows of Detroit and New York and it will be nothing but unconventional to say the least. Breaking free of the conservative design concept usually followed by Nissan was worth it as the design concept of the 2015 Nissan Maxima was admired by all present at the unveiling ceremonies.

The new dynamic design features a V-shaped chrome bar over the grille at the front end with boomerang shaped headlights. The tail lights are also designed in boomerang shape with LEDs. The power center of the new2015 Nissan Maxima lies under the hood i.e. its 3.5 literV6 engine that can go up to 300 horsepower. The design will also feature the latest technology by Nissan i.e. Friend-ME.

The futuristic design comprises of keyless entry, interior fitted with leather and state of the art infotainment system. Though no news has yet been announced on the changes in the actual design of Nissan Maxima, it is expected that the more radical changes in the design concept will be toned down. The major contenders to the new 2015 Nissan Maxima will be the Ford Taurus, Toyota Avalon and the Dodge Charger. No price tag has yet been revealed for the 2015 Nissan Maxima.